Rick Griffin is known as a surfer, cartoonist, psychedelic poster artist, legend. Griffin was born near Palos Verdes in 1944, where he took-up surfing at age 14. While he was still in high school in the 50’s he was heavily influenced by Mad magazines comic styling but he soon found his own voice, creating his own surf style that would become iconic. Through his undeniable artistic talent and connections through surfing, Griffin was soon working for surf legend, Greg Noll, among others. After graduating from high school he joined Surfer Magazine as a staff artist– creating the legendary California surf scene character Murphy, and working his way up to Art Director by the time he was of 20. But by 1964, Griffin decided it was time to move on and see what the world outside of So Cal’s tight-knit surfer scene had for him.
View the original article SURF, 60′s PSYCHEDELIA & BORN AGAIN | THE TRINITY OF ARTIST RICK GRIFFIN at The Selvedge Yard
END_OF_DOCUMENT_TOKEN_TO_BE_REPLACED

The Tale of Bunker Spreckels

The tale of Bunker Spreckels (1949–1977) reads like a pitch for a movie to rival Boogie Nights: the stepson of Clark Gable is a privileged Los Angeles party boy who is heir to a multimillion–dollar fortune; passionate about surfing, martial arts, guns, and women, he lives the life of a debauched international jet-setter before succumbing to his excesses at the tender age of 27.

END_OF_DOCUMENT_TOKEN_TO_BE_REPLACED

Artists Margaret Taylor and Simone Wilson make a variety of folk art and home furnishings from reclaimed and re-constructed materials which are sold through Miss Taylorâ€™s Atlanta-based company, dryads dancing.
The one-of-a-kind, pastel quilted tin frame pictured is made from antique ceiling tin, house molding and beaded board.
available in pink, blue, or green and various sizes up to 16Ã—20â€³ priced ranging from $38 to $250 @ dryadsdancing.com 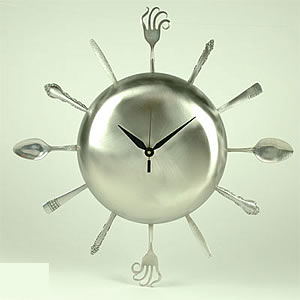 What was once the top of a pot and a few forks and spoons, now is a fun recycled wall clock. Find inspiration while seeing everyday objects in unusual places.Find at Mixt Goods